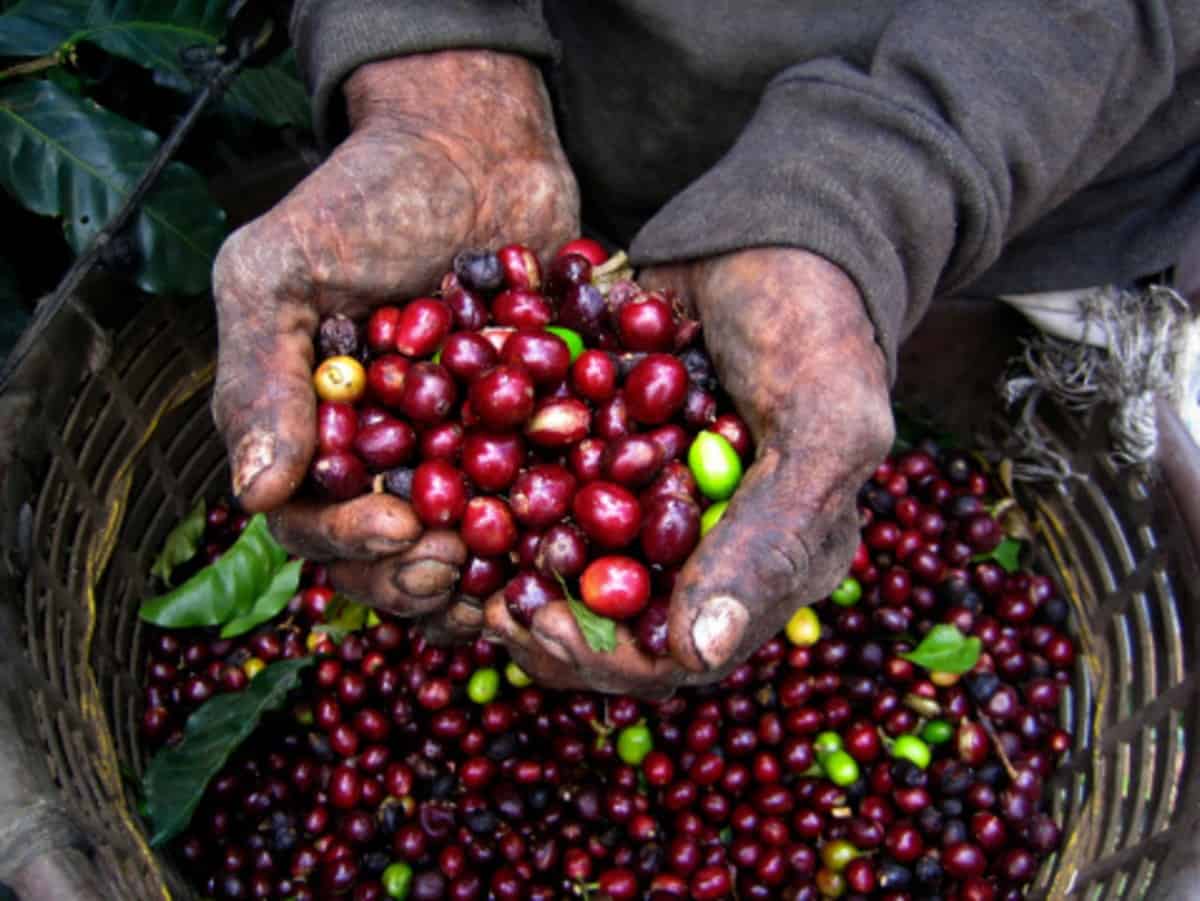 For more than a century, coffee production in El Salvador has fueled the Salvadoran economy and shaped its history. Coffee, which grew rapidly in the nineteenth century, has traditionally provided more than half of El Salvador’s export revenues, reaching a peak of more than $615 million in 1980.

With the political and economic turmoil caused by a civil war in the 1980s, the coffee industry has struggled to fully recover, earning around $403 million from coffee by 1985.

El Salvador coffee beans have a full-bodied flavor without a lot of the acidity found in other brands, giving the coffee a honey-like sweetness. It’s a popular blending bean because it blends well with other beans, resulting in a softer, smoother flavor.

Today, I will be giving you everything you need to know about El Salvador coffee, from its history to its production and brewing, EVERYTHING under one article.

Coffee was first grown for domestic use in El Salvador in the early nineteenth century.

By the mid-century, the commercial promise of coffee was obvious, and the government began to favor its production through lawmaking such as tax breaks for producers.

By 1880, coffee had essentially become the sole export crop.

Around 1895, over 6000 hectares of land were designated solely for coffee cultivation. Many coffee farmers saw coffee as a way out of poverty. Coffee exports accounted for 90% of El Salvador’s total exports in the 1920s and 1930s.

However, putting all of their eggs in one basket led to the country’s demise, as the global depression of the 1930s reduced coffee prices by one-third, and with no money to work, coffee rotted in the fields.

Thousands of peasants’ rural discontent turned to anger in 1932, and riots erupted across the country. Thirty thousand workers were killed, causing demand for coffee farmers to skyrocket. Despite these calamitous events, the coffee industry survived and thrived after the Great Depression.

El Salvador was known as one of the most intelligent coffee nations, having developed some of the most sophisticated farming systems that are still used today.

El Salvador was the world’s fourth-largest coffee exporter by the 1970s.

But disaster struck again in 1979, when the Salvadoran Civil War began, killing hundreds and slowing the coffee business for 13 years. Following the war, reforms began to take effect, and many coffee farmers returned to work.

The effects of the conflict may still be seen today, with many farmers owning 20-hectare farms. In 2018, coffee accounted for 60% of El Salvador’s exports. The implementation of fair trade has significantly improved the livelihoods of coffee farmers in El Salvador, opening up more options for other farmers to grow high-quality coffee.

What Is El Salvador Coffee?

El Salvador coffee is recognized for its rich body, mild flavor, and gentle acidity. Coffee beans might have a floral and spicy aroma or a sweet and fruity aroma, depending on the area.

How Is El Slavador Coffee Made?

El Salvador’s coffee growing conditions are very similar to those of other similar countries. Many coffee farms are located at high altitudes, allowing the coffee to grow at its best. Many of the regions have hot climates and ideal coffee-growing conditions.

For its coffee, the Salvadoran Coffee Council has established a stringent classification system. It’s done to position the country’s coffee in the world’s best gourmet markets.

The coffee must be cleaned by hand, processed with freshwater, picked red (ripe), and contain zero percent defective beans, to name a few of the most stringent requirements. This coffee is only exported if it meets these criteria and has been designated as gourmet.

El Salvador produces more than 90% of its coffee in the shade and at a high altitude. The fertile soil of the vast Salvadoran highlands and volcanoes is ideal for growing high-quality coffee beans.

What Kind Of Coffee Is Grown In El Salvador?

Depending on the region of El Salvador where the trees are grown, there are several different varieties, each with its own set of characteristics.

Bourbon is a naturally occurring bean variety found in El Salvador’s high mountains. Many consider it to be one of the higher-quality strains available, and it is the source of the Pacas strain.

The Bourbon Cultivar coffee plant stands out among the others; it is a tall plant with long branches that bear deep red berries. This type of coffee plant thrives at higher elevations.

The Bourbon has a rich aroma with floral overtones, as well as a sweet, chocolatey flavor. Bourbon coffee is well-balanced, sweet, and pleasant, with a distinct chocolate flavor.

Pacas is El Salvador’s second most popular coffee variety, and it is thought to be a mutation of the Bourbon coffee plant. It’s a short plant with long branches and deep roots.

This coffee plant has a high tolerance for wind, sun, and drought due to its roots. It grows better at higher altitudes, similar to Bourbon coffee.

Pacas coffee has a medium body and a light scent and aroma. It has a pleasant aftertaste and moderate acidity.

Because Geisha Coffee is a new strain of bean imported from Ethiopia, it could take a few years before you see any for sale. These beans are known for their distinct floral and sweet flavor, which commands a premium in other parts of the world. These beans can give your coffee jasmine, honey, or black tea flavor.

Pacamara is a Coffea Arabica hybrid created by crossing Pacas and Red Maragogype; it is a medium-sized coffee plant with large berries. Pacamara grows at high altitudes, like most Salvadoran coffee plants.

This coffee has a strong floral aroma and sweetness, as well as a lingering chocolate flavor. It has a full body and a delicious finish.

Tekisic, also known as Salvadoran Bourbon Coffee, is a tall, slow-growing plant that grows well at high elevations. This coffee plant is a variant of the Bourbon variety.

The mass selection process was repeated until 1973 when production of the new type of coffee plant began. The new coffee seeds that resulted were first distributed in 1976 under the commercial variety name Tekisic.

This hybrid originated in Brazil and was first introduced to El Salvador in the 1970s. The best altitude for growing Catuai is between 600 and 1,200 meters above sea level.

El Salvador coffee beans have a full-bodied flavor without a lot of the acidity found in other brands, giving the coffee a honey-like sweetness. It’s a popular blending bean because it blends well with other beans, resulting in a softer, smoother flavor.

Below is a table that can give you somewhat an idea of what the different varieties of El Salvador coffees would taste like:

Here is a video that can give you an idea of how Salvadoran coffee is processed.

Unlike other American coffees, Salvadoran coffee is known for its good body, sweet honey-like flavor, and mild acidity. It is mostly because of the region that you can get a spicy, sweet, or fruity aroma.

In my opinion, if you can get a hold of El Salvador coffee packets somehow you should store a bunch so that you can replace them with your ordinary coffee.

Yes, it is acidic. There are two types of coffees, arabica, and robusta. Arabica is more acidic than robusta beans because it grows and matures slowly which allows more improved development of flavor and higher acidity. If you want to know more about the difference between Robusta and Arabica, you can check it out in my other article.

While coffee from El Salvador isn’t as popular as it once was, it’s still widely available in supermarkets, and it’s a popular blending bean that helps many brands create a smoother coffee with less acid and a full body.

Modern farmers are reviewing better rights and pay than in the past, and their popularity may be resurrected with the addition of the popular and expensive Geisha beans.

With this, I hope all your queries have been answered!

link to Half-and-Half Coffee (What's There To Know)

Short answer: Café Bustelo is a very strong, espresso-style Cuban coffee that was created by the Bustelos, Gregorio Bustelo, and his wife. Are you the kind of person who needs a cup of...