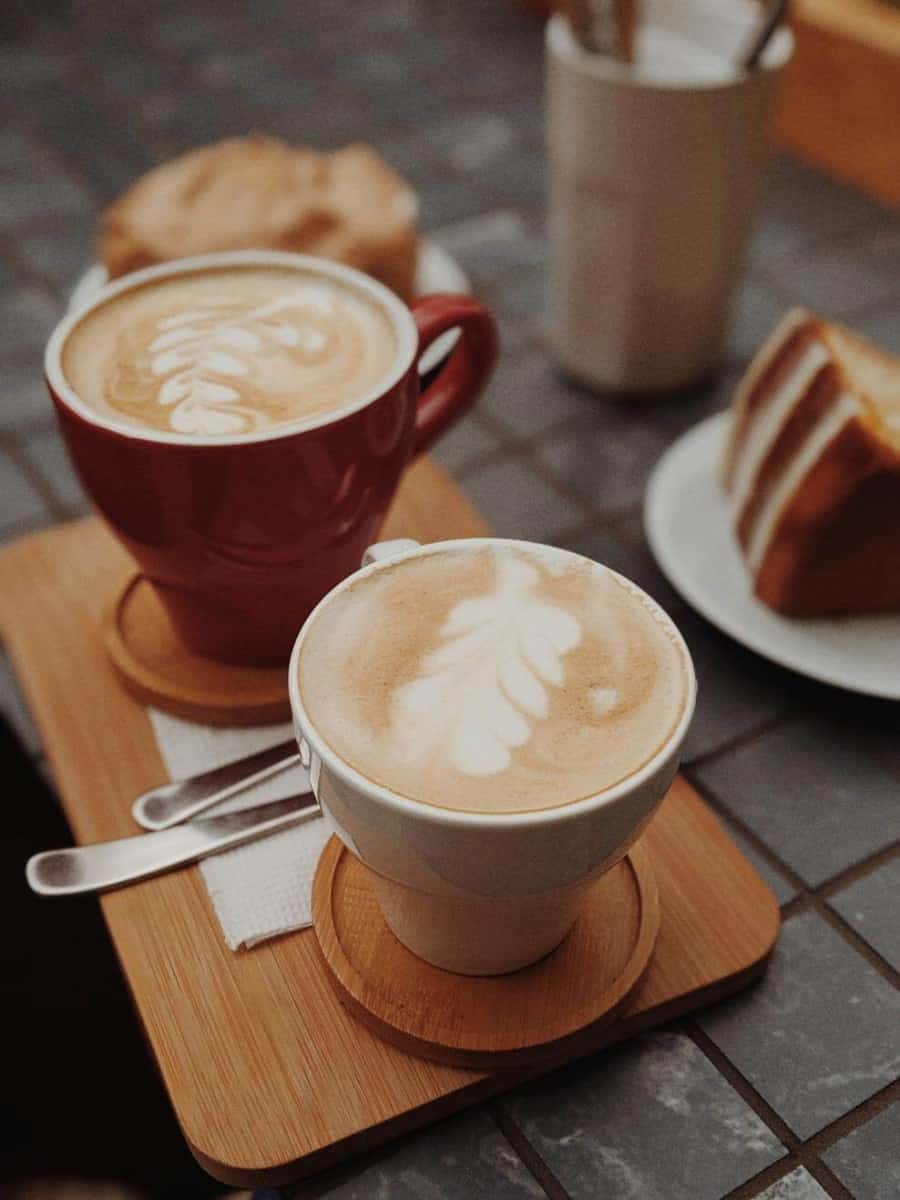 Latte and cappuccinos are two of the most popular coffee drinks in the country. The ingredients in these drinks are nearly identical, yet it’s the barista’s skill that makes the difference in the drinks.

Both drinks are prepared with an espresso base and two additional ingredients – steamed milk and foamed milk. The caffeine content in both drinks is also similar at around 154 mg as both of them are prepared using an equal amount of espresso.

In this post, we’ll learn more about each coffee variant, their similarities, and differences, and how to make each of them at home. So let’s begin.

What is in a cappuccino?

This drink gained popularity here in the US during the 1980s, and we add double shots in our cappuccino instead of just one.

The second layer is steamed milk that’s added on top of the espresso shots, followed by a final layer of an airy and thick foam that gives the drink a luxurious, velvety finish.

A cappuccino carries a more robust espresso flavor than a latte as it contains less milk and more foam.

When prepared correctly, a cappuccino will have a 1:1 ratio of liquid to foam.

What is in a latte?

A latte also starts with the same base — a single or double shot of espresso. This espresso base is then topped with several ounces of steamed milk to produce a creamy, rich drink that has a more subtle espresso taste.

When making a latte, the standard espresso-to-steamed-milk ratio is about 1:2. After that, the latte is topped with a layer of foam.

Differences between a latte and cappuccino

As I mentioned above, both latte and cappuccino contain espresso shots and two additional ingredients: steamed and foamed milk.

Before we move on towards comparing both drinks, let’s have a look at their key differences:

If you want to learn more about the differences between a latte and a cappuccino, you can watch this video.

Which is healthier: latte or cappuccino

Well, the answer to this question depends on your definition of healthy.

When it comes to calories, a cappuccino has fewer than a latte because it contains less milk. As a result, it can be regarded as a healthier option.

Non-fat milk or milk alternatives such as coconut, almond, or oat milk also taste great with these drinks while lowering the calorie count at the same time. You can read my article on oat milk and coffee here if you’re interested to know more.

Cappuccino vs. latte: Which is stronger?

The lesser amount of milk in a cappuccino makes it taste stronger than a latte.

Both drinks contain approximately the same amount of espresso, so their caffeine content is the same (around 154 mg). Strength is merely measured by how much espresso is tasted in the beverage.

In other words, a latte has a considerably milder flavor when compared to a cappuccino.

How to make a latte?

How to make a cappuccino?

To sum it all up

Cappuccinos and lattes are two espresso-based coffee drinks that have grown in popularity not just here in the US but worldwide. The basic ingredients of both drinks are similar but the preparation specifics differ, resulting in the unique taste of each drink.

The process of making a cappuccino or a latte begins with the preparation of an espresso base in the same serving size – and it depends on your preference if you prefer a single shot espresso or a double.

A latte is made by adding several ounces of steamed milk to the espresso base whereas the milk ratio in a cappuccino is kept around 1/3 of the drink.

There’s a thin layer of foam at the top for a latte while a cappuccino has a thick milk foam that gives a rich mouthfeel to the drink.

The final and most creative step is to set milk foam on top of the drink. This is where you can do some latte art – that fascinating pattern you see on top.

Because both beverages are made with the same number of espresso shots, the caffeine amount is similar. However, the flavor of a cappuccino is stronger than that of a latte because the latter contains more steamed milk, which lightens its taste.

A cappuccino is also a healthier option than a latte. This is because latte contains more milk, which means it contains more fat, calories, and protein.

Both cappuccino and latte taste amazing and it basically depends on your preference – if you want a stronger coffee flavor or a milkier drink. I urge you to try both so you’ll know which one you’ll love better or maybe you’ll just like both.