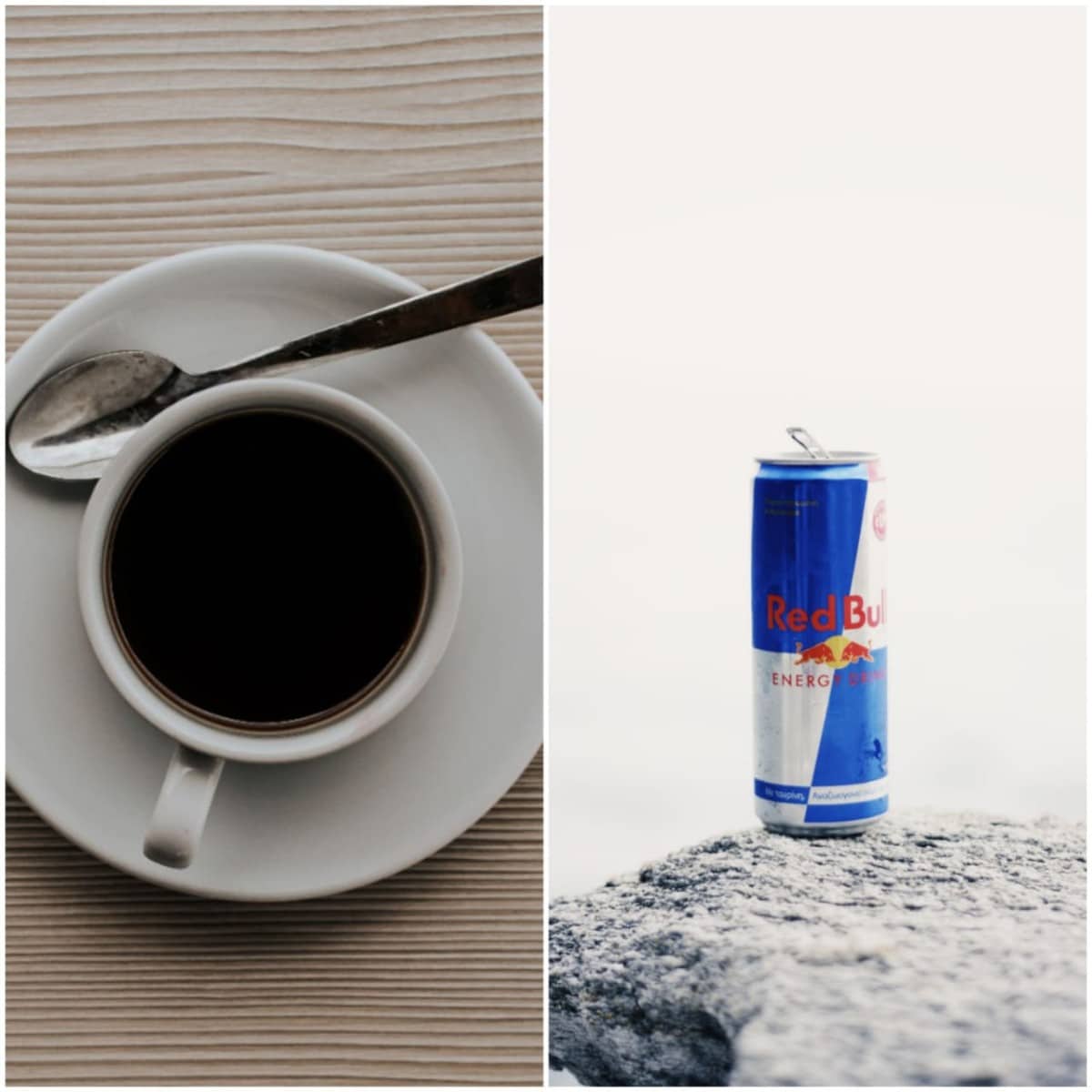 Every now and then, we all need a jolt of energy to get us through the day. While many people drink coffee, such as espresso, to increase their alertness, others drink energy drinks, such as Red Bull, to lessen their drowsiness.

Many folks drink coffee in the morning, while energy drinks, such as Red Bull, are typically drunk at midday or late afternoon as a pick-me-up beverage.

It’s interesting to learn that Red Bull is one of the world’s best-selling energy drinks. Like coffee, it’s also a popular caffeinated beverage.

But you might be wondering which one is really better?

Come with me as we go over the pros and cons of each drink and find out which is really the more beneficial one.

What’s the difference between espresso and Red Bull?

Espresso is made by forcing hot water thru tightly packed coffee grounds, resulting in a robust coffee concoction known as an espresso shot. It has a rich and bitter taste, containing a high level of caffeine as well as antioxidants.

The espresso shot can also be used to make several other coffee variations, such as cappuccino or mocha, and this is done by adding milk and sugar. Or if you prefer just something plain, you can just drink it straight up or add more hot water to make an Americano.

On the other hand, Red Bull is an artificial energy drink that contains caffeine and is non-alcoholic.

It acts as a stimulant, providing a quick energy boost, especially for athletes and others who need that extra push to work out or get through their daily routine.

Red Bull’s taste is sweet and somewhat metallic because of its caffeine content. It contains some vitamins and minerals that are beneficial for your body.

Which has a stronger kick?

Also, espresso is considerably more concentrated and powerful because coffee is directly extracted from coffee beans, and the only liquid content is the water used to extract the coffee flavor from the beans.

On the other hand, Red Bull is not as strong as espresso. Even though it also has a high level of caffeine and vitamins, it’s less potent than espresso.

Furthermore, the effect of espresso lasts longer than that of Red Bull. While Red Bull’s effects last 2 to 3 hours, espresso’s effects last 3 to 5 hours.

You can discover more about the effects of Red Bull and Espresso by watching the video below.

Which is healthier: Espresso or Red Bull?

Espresso is a lot better for you than Red Bull. It has the same benefits as coffee in terms of helping you stay awake and alert but has fewer calories than Red Bull. Red Bull, on the other hand, contains some vitamins that espresso doesn’t have.

If you don’t add dairy or sugar to your espresso, you can get a slew of health benefits. It also contains a lot of antioxidants, which aid in the removal of harmful toxins from your body. But keep in mind that drinking coffee in moderation is the key.

Studies show that drinking coffee strengthens your immune system and improves your physical and mental performance.

Regular but moderate consumption of espresso can also protect you from several diseases such as Alzheimer’s, type 2 diabetes, and Parkinson’s.

But keep in mind that just because something’s good for you doesn’t mean you can consume it in excess. Otherwise, drinking too much coffee, especially variants of it that have dairy and sugar, can cause serious harm to your health.

Though Red Bull contains vitamins and minerals, it also contains artificial sweeteners that are difficult for your digestive system to absorb. This can result in bloating and an upset stomach.

It has also been discovered that Red Bull raises blood pressure.

As a word of caution, caffeine consumption should be restricted to no more than 400 mg per day. Caffeine can cause major health concerns when consumed in excess of the recommended limits.

Pros and cons of each drink

Both of the drinks have their own pros and cons. For starters, and I’m sure you already know this, Red Bull is artificially–made while espresso is an all-natural drink.

Before delving into the pros and drawbacks of each drink, have a look at the table below to get a sense of what each one contains.

Now that you know what both of the drinks contain, let’s look at the pros and cons of espresso first.

Moderate consumption of espresso has the following health benefits:

Excessive consumption of espresso can lead to negative effects like:

Now have a look at the pros and cons of Red Bull. It has fewer pros and more cons.

Though Red Bull provides you with many essential vitamins, it isn’t good for your health when you consume it daily. Its negative effects include:

Because they both contain caffeine, Red Bull and espresso deliver an instant energy boost to our bodies. However, since espresso is naturally high in antioxidants, it’s a healthier choice in the long run.

Unlike Red Bull, espresso offers numerous health benefits, including a longer-lasting caffeine boost without the extra sugars and calories, and it helps protect our organs from diseases such as stroke, heart disease, and diabetes, to name a few.

If you want some variety though, you can, of course, add milk to your espresso, making a latte or cappuccino.

Honestly, drinking Red Bull is not bad as long as you don’t make it a daily habit making you hooked to it especially since there are so many various flavors to choose from.

Be it Red Bull or espresso, it’s important to be mindful of the amount you consume and not to be addicted and dependent on them. Moderate consumption not just of caffeinated beverages but of everything we eat and drink is the key to a well-balanced diet.